Nothing says fall like hearty soups made with a thick rich broth made with fall harvest vegetables. I used 3 different kinds of squash from my garden, but you can use whatever you prefer. My husband loves Pasta Fagioli soup, but I added extra flavor and richness with the squash. The soup is even better the next day so don’t be afraid to make this big pot of soup! The next day, just pick some crusty Portuguese bread or make your own Pao Milho – Corn Bread to go along with the soup and dinner is done! P.S. My husband loved it and so will your family! Enjoy the fall harvest!

Look at the beautiful fall colors in these squash
Ingredients:
Note: You may use the following squash or substitute with your favorite.
1 cup Butternut squash (peeled and chopped into 2 chunks)

Preparation:
Place the onion, garlic, celery and olive oil in a large soup pan or dutch oven. Cook for a few minutes until the onion is translucent. Add the squash and tomato, salt and pepper and saute for about 5 minutes.  Add the water and broth and let come to a boil. Cover the soup and let cook for about 10 minutes until the squash is tender. Remove from heat and puree vegetable with an immersion blender to your desired consistency. Return to stove and let come to boil. Add the pasta, beans and the carrots and let cook on medium heat for about 10 minutes until the pasta is almost fully cooked. Add the parsley, and basil, stir and taste. Add the piri piri sauce if desired and more salt and pepper if needed. Remove from heat until ready to serve. The soup will thicken the longer it sits. Add a drizzle of olive oil and a the shredded cheese into each bowl if desired when serving.

This week, I was craving a clam bake at one of my favorite restaurants; Jasper White’s Summer Shack which makes the best Lobster in New England. His lobster bake is served with 1 whole lobster, steamers, potatoes, corn on the cob, a hard boiled egg, and Portuguese Linguica…. It’s a classic New England clam bake. I decided make Seafood Corn Chowder to satisfy my craving. 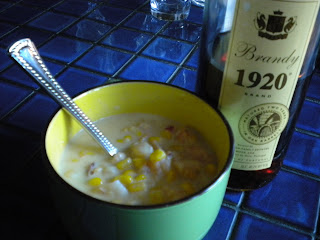 I’ve created this chowder by combing two soups; the classic corn chowder, with my favorite soup, Lobster Bisque. The first time I tried the bisque it was served with a sniffer of brandy on the side and from that day on, I was hocked!

So, I gave this soup a Portuguese ethnic twist by using the classic Portuguese Brandy, 1920 which tones down the sweetness and gives this soup a mellow…smooth taste!

In a large soup pan, saute onions, celery, scallions, garlic and carrots in olive oil for about 5 minutes until golden but not browned. Add chicken broth and cook veg. for about 15 min, or until carrots are tender.
Puree all the vegetables with blender until it’s a smooth consistency. Then press the soup through a fine food strainer to catch the veg threads. Add the cream and the milk (reserve one cup milk) Add the corn, butter salt & pepper and cook for 10 min on med heat (stir often not to stick). 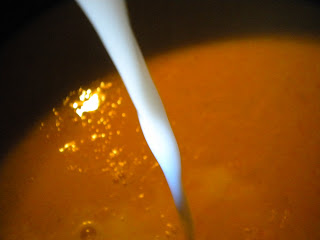 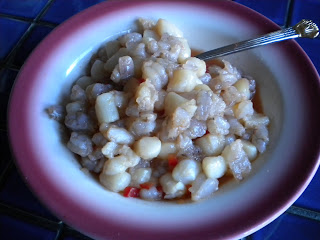 Mix the 1 cup of milk with the flour and make a slurry. Then add a little of hot soup to the milk and flour mixture. Stir until the flour is dissolved. Add the flour mixture to soup slowly and keep stirring.
Add the scallops, shrimp, clams, & lobster and cook for 5 min. Let the soup cook for about 10 minutes on low heat…keep stirring and don’t let it over boil which will cause it to burn.

(If soup is thin, mix a little more flour mixed with milk in a small bowl. Add 1 tablespoon of the soup to the flour, then pour the mixture into the soup and let it cook 5 minutes or until thickened.)
Add the 1920 brandy ( or any kind on hand) … let it cook for a 5 more minutes… and remove from heat.
Let soup sit for about 10 minutes before serving.


P.S. Save some brandy to have with an espresso, along with dessert.
Posted by Tia Maria at 12:19 PM No comments: 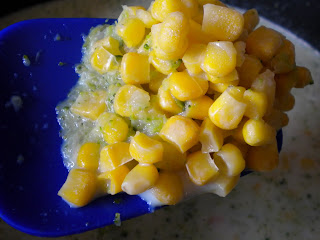 Dear friends,
Get your family to eat their veggies with this sweet and savory soup. I put some chopped red pepper to brighten up the colors. I used low fat dairy to reduce calories, but if you want to use whole milk and cream you'll get the same great flavor. This will give you about 10 bowls of soup,if you want to make less just cut the recipe in half.
I came up with this recipe for my mom, who had undergone surgery, leaving no appetite. This soup brought her strength back. It's packed with iron, calcium and vitamin C. Enjoy!

In your nontick or heavy soup pan, saute onions & garlic in the olive oil and margarine for about 5 minutes untill the onions are cooked but not browned. Add chicken broth, broccoli, cauliflower & salt. Cook for about 8 minutes untill veg are cooked and remove pan from heat. Remove about 2 cups of the veg flowerets, chop them coarsely and set them aside. With an emersion blender puree the veg untill they are mashed but not too disolved. 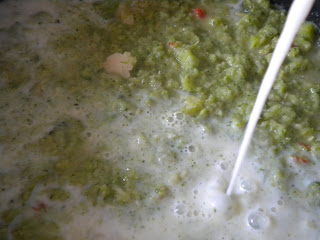 Set aside 1 cup of the milk. Add remaining milk, cream, chopped pepper, blk pepper, and corn. Cook on med heat for about 10 minutes. In a small bowl mix flour with the one cup of milk untill creamy, then slowly add 1 cup of the warm milk to the flour mixure. Slowly add the flour mixture( slurry) to the soup and stir well. Add the chopped flowerets to the soup and mix.Reduce the heat to low heat and let the soup simmer for about 1/2 hour stirring the soup regularly. Try not to turn the heat up past med, or the soup will overspill and burn. Add more salt or pepper to taste. Let the soup cool and store it in the fridge.If it thickens too much just add a little warm milk, or cream when you heat it up. 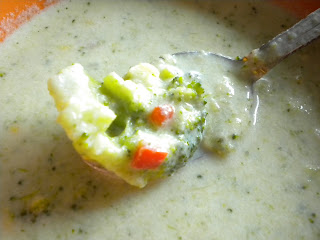 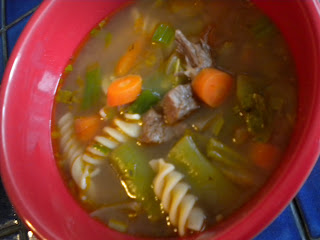 Pot Roast, is a sure way to a man's heart and my husband is no exception that's why I named this soup for him. It's his favorite meal, so one day, I turned it into his favorite soup. Try it the next time you have all that extra pot roast leftover in the fridge.
Easy and delicious...... Go get that guy's heart!


Remember that old saying:
Never through food away! Waste not! Want not!


Shred the meat into small 1 inch pieces and set aside. In your large soup pan on high heat, saute the olive oil, onion, celery, carrots and garlic for about 5 min. Add the water, bullion cube, salt & pepper and let it come to a boil. Add the pasta, corn, peas, and green beans and cook for about 10 minutes. Next add the meat, gravy, tomato paste, and cooked vegetables. Cook for about 15 minutes on low heat.
Add the scallions, parsley, basil and more salt and pepper if needed.

When I make soup, it's like having a $200 therapy session. So whenever I find myself having one of those down days,I'll carry my sad face accross the kitchen floor, look inside the pantry and make myself focus on creating a pot of soup.
Soon, my spirits become uplifted and I begin to feel so much better.
So, I suggest that the next time your feeling down, or even just bored on a rainy afternoon, get your head deep into that pantry and challenge your creativity.

I went into my pantry last week and spotted a can of crushed tomatoes with garlic and basil. Italian!, I said to myself and what kind of soup could be more Italian than basic tortellini. Did I have tortellini? Yes, I had a package of Angie's Tortellini mix in my freezer.

Saute chopped onion, celery & parsley in olive oil for about 3 minutes.
Add broth, water, tomatoes, tortellini spice mix from package.
Cook for about 5 - min or untill boiling.
Add the tortellini & vegetables, cook for about 10 minutes or untill veg are cooked. Add the parsley flakes and basil, salt & pepper to taste.

Top with shredded Pecorino Cheese for a cheesy kick before serving.
Posted by Tia Maria at 12:58 PM 1 comment:

All you need is Soup

I have alot of that green soup leftover that I made yesterday. Look for the recipe (Portuguese Caldo Verde-Green Soup on this blog). I'm going to tell you how to turn that soup into a hearty white bean and collard green soup. It's so simple. Just heat up the soup in a large soup pan, then add:

This soup has all the protein, iron, vitamin K and potassium you need, so I bought a loaf of garlic bread at the supermarket, heated it up in oven for 10 minutes and served it with the soup.

You don't have to go out for takeout. You can have dinner ready in 15 minutes.

Bye
Posted by Tia Maria at 1:13 PM No comments: 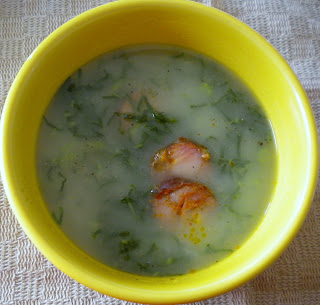 Hi, Today we're going on a journey to Portugal were the classic green soup, "Caldo Verde" is probably the most loved and well known soup of the country. It's sometimes known as "Kale Soup" but this classic is not made the same way and not made with kale at all.This soup is made with a potato puree, and collard greens.
I've doubled the recipe so that you can have a big pot prepared for a few days since this soup is even better the next day. Nothing will satisfy your hunger and keep you warm on a cold winter day. This will be your family favorite. 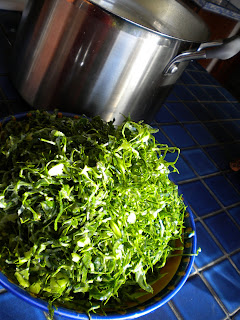 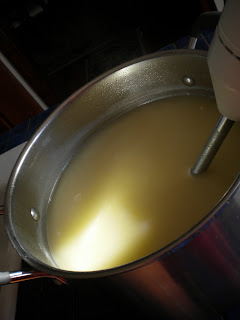 Add collard greens and chourico sausage.Cook for about 10 minutes. Remove sausage, slice into 1/4 inch slices, and put aside for garnish. Serve each bowl soup with 3 slices of chourico. Add a drizzle of olive oil, and pepper to taste. Enjoy this healhy classic!

My family calls me the "Soup Queen". It started the day husband and I opened a Deli in our hometown where I made two homemade soups everyday for three years. So every morning while I made the coffee, the muffins and the bagels at 6:00 am I'd plan the menu and the soups for the day. Many of the recipes were taught to me by my mother, but most of them were created by me, on those early mornings when I had to pull magic out of my chef's hat to keep the customers coming back.
View my complete Profile